When someone is not following the righteous path with his heart full of viciousness, all sorts of doubts creep up. That is what happened to Duryodhana when he went to his teacher Drona and spoke those unnecessary words in the previous verses. He was perhaps trying to give himself confidence and was expecting Drona to reassure him. But Drona remained silent throughout.

The old and experienced man in Kuru Dynasty, Bheeshma, blew his conch Simhanādam loudly, giving happiness and confidence to his army.

Having listened to Duryodhana and seeing Drona standing quietly without responding, Bheeshma knew that if he let Duryodhana continue to talk, he would be demotivating others in the army. So he went ahead and blew his conch (named Simhanādam) to give joy and confidence to his army. Although Bheeshma did this seeing the mental condition of Duryodhana, the Kauravas became the aggressors officially starting the war through this act.

After Bheeshma blew his conch, suddenly conches, drums, trumpets, kettle drums, and cow horns blared forth. And there was a tremendous sound.

Then, Mādhava (Sri Krishna), and Arjuna seated in a chariot yoked by white horses, blew their divine conches.

In the way that Sanjaya uses the words and descriptions, it seems pretty apparent that his sympathies lie with the Pandavas. Perhaps he is doing that to persuade Dhritarashtra to withdraw from battle.

Yuddhistara, the son of Kunti, blew the conch named Anantavijayam. Nakula and Sahadeva blew their conches named Sugosha and Manipushpaka.

In these two verses, Sanjaya specifies the names of Sri Krishna’s and Pandavas’ conches in contrast to how he generically described the sound of conches, trumpets, etc., concerning the Kauravas.

King of Kashi, an excellent archer; Shikhandi who single-handedly can fight ten thousand warriors; Dhrishtadyumna; Virata; Satyaki who is unconquerable; Drupada and all sons of Draupadi; mightly armed son of Subhadra, all blew their conches.

Sanjaya addresses Dhritarashtra as the Lord of the Earth, and he mentions that all the other great warriors in the Pandava Army also blew their conches.

The tumultuous, thundering sound reverberated both heaven and earth, shattering the hearts of Dhritarashtra's sons.

Sanjaya has been vividly explaining the superiority of the Pandavas, perhaps trying to paint a clear picture in Dhritarashtra's mind so he may call off the war at least now.

Then, seeing Dhritarashtra's sons arrayed, Arjuna, who has Hanuman on his flag banner, ready with his weapons, taking up his bow, asked Sri Krishna to place his chariot in the middle of both the armies.

Arjuna says to Krishna that he wants to see those assembled who are desirous of fighting and who he should be fighting in this great combat that is about to start.

He continues to say that he wants to see those who have assembled there to fight, wishing to please the evil-minded Dhritarashtra’s son (Duryodhana).

Arjuna was an intelligent, courageous, focused man of action who wanted to see the enemy frontlines to strategize. He was in his element as expected, without being affected by any mental dejection until this point.

Popular posts from this blog 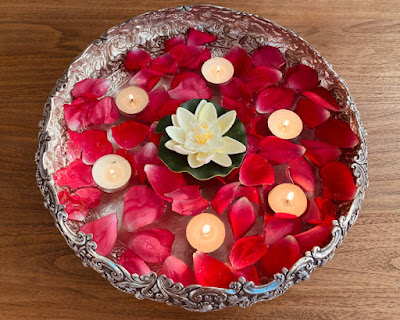 Wishing you and your family a joyous Deepavali. May your hearts and homes be filled with light forever. This Deepavali, I'm inviting light by creating space to focus on what is more meaningful to me.  Once in a while, it is wise to pause and ponder about what we are spending our time and efforts on. Are the actions we are performing taking us towards or away from whatever goals we have set for ourselves? Are we seeing light or are we digging ourselves into a deeper and darker hole we have dug up unintentionally little by little? Are we having a clear mind to pursue what matters to us? Or are we consumed with following our habitual patterns with no time to reflect upon and work towards our goals? When we clutter our homes, it's difficult for us to find something that we need at any moment. Similarly, when we clutter our minds, there is no space for the light of our inner wisdom to guide our actions in the right way to make ourselves and others around us happy. When I started Blu
Read more

The Bhagavad Geeta starts with Dhritarashtra (the blind King) asking his charioteer and advisor Sanjaya, to narrate what was occurring on the battlefield at Kurukshetra. Sanjaya had been granted the divine vision by Sage Vyasa to see what was going on at Kurukshetra. Sanjaya plays the role of a journalist to Dhritarashtra. Since the King was blind by birth, Sanjaya had to be explicit and descriptive in his narration, to allow the King to understand and feel the exact happenings on the battlefield. Chapter 1, Verse 1 Dhritarashtra asks Sanjaya what his sons and the Pandavas who have assembled with the desire to wage a war, did in Kurukshetra? Dhritarashtra is not only physically blind but also blinded by his attachment to his sons, which paved for the war, so to say. Dhritarashtra himself allowed all the atrocities and injustices that his son Duryodhana committed against the Pandavas. Because of his blind love for his son, he did not utter a word against Duryodhana, while his son wa
Read more 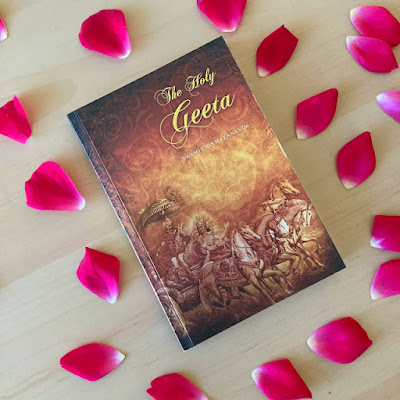